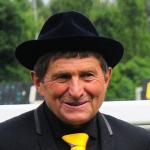 The last of the four Velka Pardubicka qualification races run at Pardubice racecourse produced a good-quality race. At last, there was a qualification race run on a cool afternoon and on good ground. The ploughed fields were a bit dusty, but we must again be grateful to the ground staff for their hard work on preparing the course.

There were ten runners, including two promising young horses, Buonarotti and Tzigane du Berlais, that had not yet qualified for the big race on October 14th.

As expected, Bridgeur ensured a good pace. Delight My Fire was tucked in in second place. Ange Guardian ran at the back of the main field. It was an uneventful race, with no fallers. As usual, the tough got going as they crossed the course prior to turning on to the grass track. At this point, Nick was pulled up, and Vandual and Val de Guye got left behind, with Nikas barely keeping up. At the 4th from home, Vicody went to the front, and Bridgeur began dropping back. Ange Guardian was then sent to the front. At the last fence, Ange Guardian and Vicody were ahead, Bridgeur was going nowhere, and Delight My Fire was in third place, with Buonarotti and Tzigane du Berlais not far behind. Tzigane du Berlais was brought with a good run in the last 100 metres, but it was too late to catch Ange Guardian.

Ange Guardian, winner of the August qualification race and second in the May qualification race and second in VP 2016, is very clearly a major contender for VP 2018. Tzigane du Berlais and Vicody were just a length behind him, which is decent form. Delight My Fire was some way behind the leading three, but this was her best performance in 2018, and she had shown last year that the extra distance of the VP is not a problem for her. Buonarotti put in a reasonable performance, after again showing distrust at the fourth from home, where he had fallen in August. He qualified well enough for the big race. Sixth-placed Nikas is clearly past his best, as he is entitled to be at the age of 13. Val de Guye’s rider was punished for not pulling up an exhausted horse. Does this mean the horse is not qualified for the Velka? Val de Guye has proven repeatedly that he is slow. His owner also has Vicody in the big race (and Ribelino, who has shown no form for a long time), so there is no need to run Val de Guye.

Supplementary entries for the VP can be made until September 27th, and we will remain unsure which horses will run in the race until Friday, October 5th.

A Category II race over 4 500 metres at Pardubice on September 8th was won well by Hegnus, which is a serious contender for the VP. Ribelino failed again, and Universe of Gracie was pulled up after he was caught up behind a couple of other horses that blocked him at the Irish Bank.

Josef Váňa (picture) has a number of well-fancied horses for the race, but will be worried, as he is every year, about who is going to ride them. Jan Kratochvíl hurt his shoulder and his arm in a fall earlier in the afternoon, and may well be unable to ride No Time To Lose or Ange Guardian on Octber 14th.