žk ž David Liška: an apprentice rider wins his title as a jockey 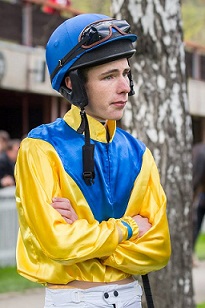 On Sunday at Prague Velká Chuchle, David Liška recorded his 50th winner, followed by his 51st winner. In the Czech Republic, a rider becomes a jockey after riding his fiftieth winner, and loses all his rider’s allowances.

David Liška is by some margin the youngest rider to gain his jockey’s title, and the first ever to gain the title while he is still an apprentice studying at the School for Apprentices. In the raceday programme, he will until June 2019 appear as žk ž David Liška, or maybe as ž žk David Liška. This combination of titles is unique in the history of Czech horseracing.

Several years ago, David Liška, who comes from south Bohemia, wrote to his local trainer, expressing an interest in horseracing, and his local trainer happened to be Václav Luka junior. The rest is history!

With just four more race meetings to be held in the Czech Republic this season, David Liška is more or less certain to be our champion jockey on the flat. Interestingly, second and third place in the championship are also likely to go to claiming riders, Beysim Ferhanov and Adam Florian. David Liška made a strong impression in the last couple of months of the 2017 season, but Beysim Ferhanov and Adam Florian have both come from almost nowhere, and each has ridden many more winners this season than in the past. The successful development of these three young riders this year has been a feature of the Czech horseracing season.